What is a volcano?

A volcano is a mountain that opens downward to a pool of molten rock below the surface of the earth. When pressure builds up, eruptions occur. Gases and rock shoot up through the opening and spill over or fill the air with lava fragments. Eruptions can cause lateral blasts, lava flows, hot ash flows, mudslides, avalanches, falling ash and floods. Volcano eruptions have been known to knock down entire forests. An erupting volcano can trigger tsunamis, flash floods, earthquakes, mudflows and rockfalls.

How are volcanoes formed?

Volcanoes are formed when magma from within the Earth’s upper mantle works its way to the surface. At the surface, it erupts to form lava flows and ash deposits. Over time as the volcano continues to erupt, it will get bigger and bigger.

What are the different stages of volcanoes?

Why do volcanoes erupt?

The Earth’s crust is made up of huge slabs called plates, which fit together like a jigsaw puzzle. These plates sometimes move. The friction causes earthquakes and volcanic eruptions near the edges of the plates. The theory that explains this process is called plate tectonics.

What are plate tectonics?

The theory of plate tectonics is a interesting story of continents drifting from place to place breaking apart, colliding, and grinding against each other. The plate tectonic theory is supported by a wide range of evidence that considers the earth’s crust and upper mantle to be composed of several large, thin, relatively rigid plates that move relative to one another. The plates are all moving in different directions and at different speeds. Sometimes the plates crash together, pull apart or sideswipe each other. When this happens, it commonly results in earthquakes.

How many volcanoes are there?

There are more than 1500 active volcanoes on the Earth. We currently know of 80 or more which are under the oceans. 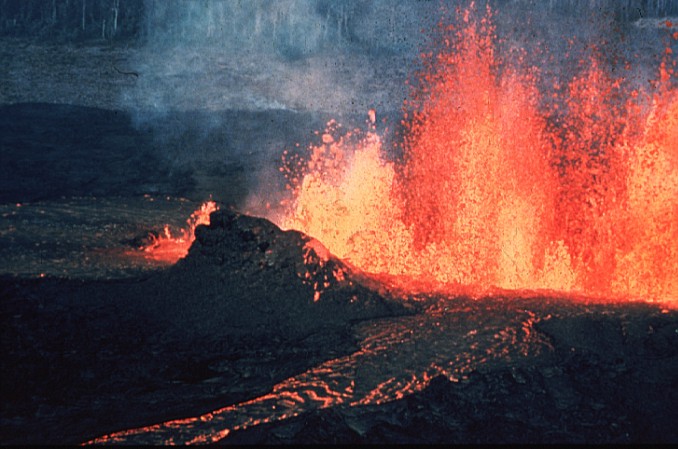 Why does lava take a long time to cool down?

Lava cools slowly because lava is a poor conductor of heat. Lava flows slow down and thicken as they harden.

What is a pyroclastic flow?

A pyroclastic flow is a fluidized mixture of solid to semi-solid fragments and hot, expanding gases that flows down the sides of a volcano. These awesome features are heavier-than-air emulsions that move much like a snow avalanche, except that they are fiercely hot, contain toxic gases, and move at phenomenal, hurricane-force speeds. They are the most deadly of all volcanic phenomena.

A lahar is a type of mudflow or debris flow composed of pyroclastic material, rocky debris, and water. The material flows down from a volcano, typically along a river valley. It is very dangerous because it’s consistency and the way it acts is very much like cement. It is liquid when it’s moving, but when it stops, it solidifies. This can cause just as much devastation as lava itself.

Pumice is a light, porous volcanic rock that forms during explosive eruptions. It resembles a sponge because it consists of a network of gas bubbles frozen amidst fragile volcanic glass and minerals. All types of magma (basalt, andesite, dacite, and rhyolite) will form pumice.

What is the largest active volcano?

The world’s largest, active volcano is Mauna Loa in Hawaii, where famous coffee is grown in the rich volcanic soils. Mauna Loa is 13,677 feet above sea level. From its base below sea level to its summit, Mauna Loa is taller than Mount Everest.

What is the Ring of Fire?

What are some other notable volcano eruptions?

Mount Pelee was a dormant volcano situated in the Caribbean island of Martinique. In 1902, it erupted in a massive horizontal explosion sending huge clouds of ash released towards the nearby town of Saint-Pierre. The side of the volcano exploded and lava flowed straight into the town, killing 30,000 people in a matter of minutes. It is regarded as one of the biggest and most devastating volcanic eruptions of the 20th century, a benchmark for future eruptions.

Mount Fujiyama, also popularly known as Mount Fuji, is an active volcano which last erupted in 1708. It is incidentally the tallest mountain in Japan. If you are visiting Tokyo, the capital of Japan, look in the west on a clear day and you will be able to see Mount Fuji. It is an iconic volcano. Mount Fuji is 3,776 meters high and it is snow clad throughout the year, with five lakes surrounding it. Currently in a state of dormancy, there has not been any eruption reported for more than 300 years. The last known eruption lasted for about 3 weeks during which it covered the surrounding villages with ash and cinders. Mount Fuji is now a popular tourist location with a large number of climbers actively scaling the mountain top.