All rivers start at the highest point in an area. As the river flows downstream, it gains more water from other streams, rivers, springs, added rainfall, and other water sources.

What is a river?

A river is freshwater flowing across the surface of the land, usually to the sea.

Where do rivers begin?

Rivers begin at their source in higher ground such as mountains or hills, where rain water or melting snow collects and forms tiny streams.

How are rivers formed?

When one stream meets another and they merge together, the smaller stream is known as a tributary. It takes many tributary streams to form a river.

How do rivers grow?

A river grows larger as it collects water from more tributaries along its course. 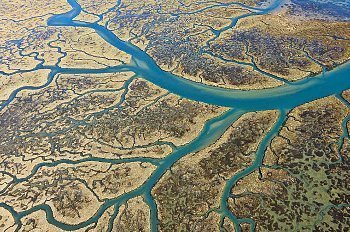 Where do rivers end?

The great majority of rivers eventually flow into a larger body of water, like an ocean, sea, or large lake. The end of the river is called the mouth.

What do rivers provide?

Most settlements were built along major rivers. Rivers provide us with food, energy, recreation, transportation routes, and of course water for irrigation and for drinking.

The 10 longest rivers in the world are:

1. Nile – The Nile River is 4,135 miles long. It is located in the continent of Africa, mostly in the countries of Egypt and Sudan. It flows north into the Mediterranean Sea.

2. Amazon – The Amazon River is 3,980 miles long. It is located in the continent of South America and flows through several countries including Brazil, Venezuela, Bolivia, and Ecuador. It ends at the Atlantic Ocean.

3. Yangtze – Located in China, the Yangtze River is 3,917 miles long and flows into the East China Sea.

4. Mississippi, Missouri – The river system of the Mississippi River and the Missouri Rivers is the longest river system in North America at 3,902 miles. It flows south into the Gulf of Mexico.

5. Yenisei – The Yenisei River starts in Mongolia and flows through Russia to the Kara Sea in the Arctic Ocean. It is 3,445 miles long.

6. Yellow – At 3,398 miles long, the Yellow river is the 6th longest river in the world, but only the 2nd longest in China. It ends at the Bohai Sea.

7. Ob, Irtysh – The river system of the Ob River and the Irtysh River is 3,364 miles long. It flows through Russia, China, and Mongolia on its way to the Gulf of Ob. 8. Congo – The Congo River flows 2,922 miles through several countries in Africa before reaching the Atlantic Ocean.

9. Amur – The Amur River is 2,763 miles long. It flows through Russia, China, and Mongolia and ends at the Sea of Okhotsk.

10. Lena – The Lena River flows through Russia on its way to the Laptev Sea in the Arctic Ocean. It is 2,736 miles long.

Geography – Journey of a river

One thought on “RIVERS”