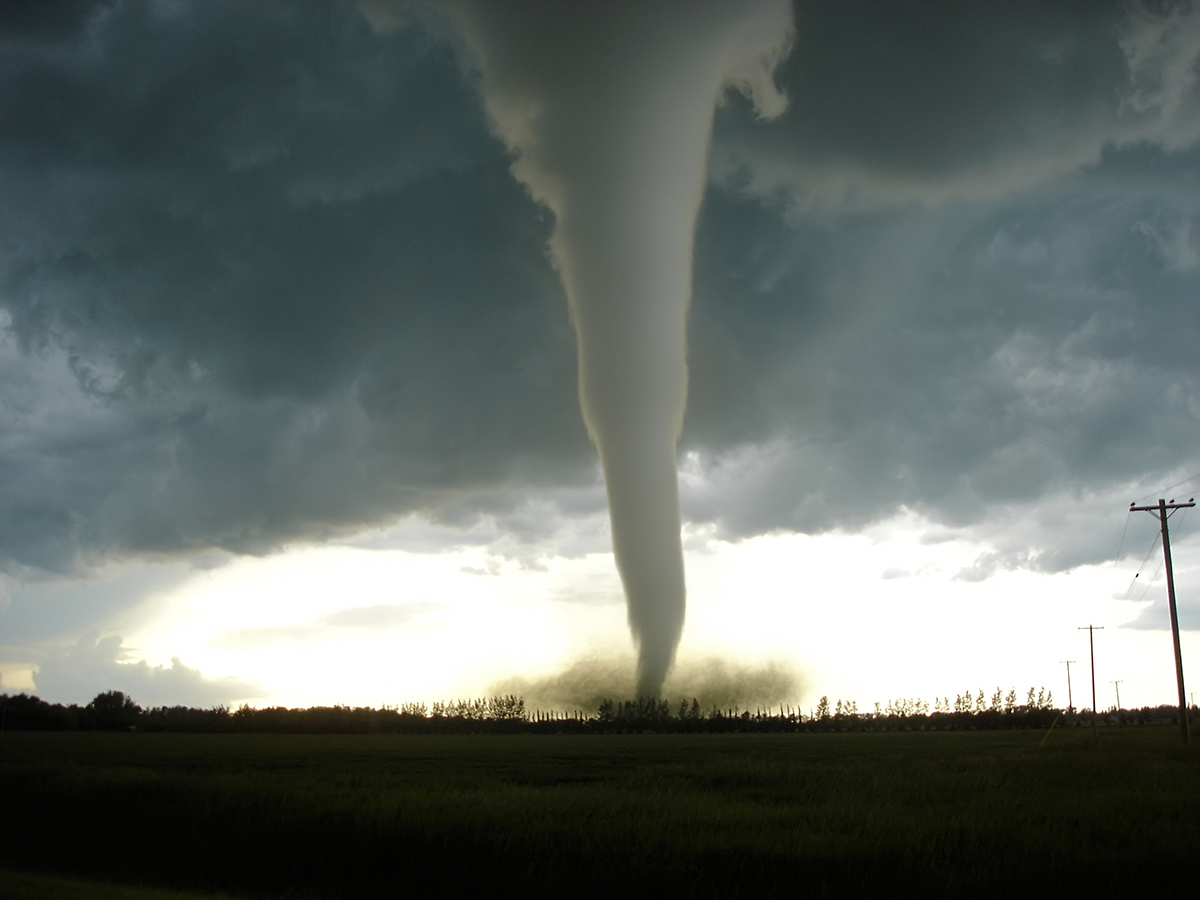 What is a tornado?
A tornado is a violent rotating column of air extending from a thunderstorm to the ground. The most violent tornadoes are capable of tremendous destruction with wind speeds of up to 300 mph. They can destroy large buildings, uproot trees and hurl vehicles hundreds of yards.

How do tornadoes form?
Most tornadoes form from thunderstorms. You need warm, moist air from the ocean and cool, dry air from the poles. When these two air masses meet, they create instability in the atmosphere. A change in wind direction and an increase in wind speed with increasing height creates an invisible, horizontal spinning effect in the lower atmosphere. Rising air within the updraft tilts the rotating air from horizontal to vertical. An area of rotation, 2-6 miles wide, now extends through much of the storm. Most strong and violent tornadoes form within this area of strong rotation.

What are some other factors for tornadoes to form?
Several conditions are required for the development of tornadoes and the thunderstorm clouds with which most tornadoes are associated. Abundant low level moisture is necessary to contribute to the development of a thunderstorm, and a “trigger” (perhaps a cold front or other low level zone of converging winds) is needed to lift the moist air aloft. Once the air begins to rise and becomes saturated, it will continue rising to great heights to produce a thunderstorm cloud, if the atmosphere is unstable. An unstable atmosphere is one where the temperature decreases rapidly with height. Atmospheric instability can also occur when dry air overlays moist air near the earth’s surface. Finally, tornadoes usually form in areas where winds at all levels of the atmosphere are not only strong, but also turn with height in a clockwise or veering direction.

What do tornadoes look like?
Tornadoes can appear as a traditional funnel shape, or in a slender rope-like form. Some have a churning, smoky look to them, and other contain “multiple vortices”, which are small, individual tornadoes rotating around a common center. Even others may be nearly invisible, with only swirling dust or debris at ground levels as the only indication of the tornado’s presence.

WHAT IS THE FUNNEL CLOUD?
A funnel cloud is a rotating cone-shaped column of air extending downward from the base of a thunderstorm, but not touching the ground. When it reaches the ground it is called a tornado.

It is not fully understood about how exactly tornadoes form, grow and die. Tornado researchers are still trying to solve the tornado puzzle, but for every piece that seems to fit they often uncover new pieces that need to be studied.

WHERE ARE TORNADOES MOSTLY  LIKELY TO OCCUR?

The geography of the Central part of the United States, known as the Great Plains is the area which experiences most tornadoes. It is commonly known as the “Tornado Alley”..