The Peloponnesian War was fought between the Greek city-states of Athens and Sparta. It lasted from 431 BC to 404 BC. Athens  at the end was defeated and this put an end to the golden age of Ancient Greece.

Where did the name Peloponnesian come from?

The word Peloponnesian comes from the name of the peninsula in southern Greece called the Peloponnese. This peninsula was home to many of the great Greek city-states including Sparta, Argos, Corinth, and Messene.

After the Persian War, Athens and Sparta had agreed to a Thirty Year Peace. They didn’t want to fight while they were trying to recover from the Persian War. During this time, Athens became powerful and the Athenian empire grew under the leadership of Pericles. Finally, in 431 BC, Sparta declared war on Athens.

The first Peloponnesian War lasted for 10 years. Spartans dominated the land and the Athenians dominated the sea. Athens built long walls all the way from the city to its port. This enabled them to stay inside the city and have access to trade and supplies from their ships. Although the Spartans never breached the walls of Athens during the first war, many people died inside the city due to plague.

After ten years of war, in 421 BC Athens and Sparta agreed to a truce  known as the Peace of Nicias
Athens Attacks Sicily

In 415 BC, Athens helped their allies in Sicily. They sent an army to attack Syracuse. Athens was defeated and Sparta began the Second Peloponnesian War.

Spartans searched for allies to fight Athens.  At the end, Athens recovered and won some battles from 410 to 406 BC. Athens is Defeated In 405 BC the Spartan general Lysander defeated the Athenian. With the fleet defeated, the people in the city of Athens began to starve. So in 404 BC the city of Athens surrendered to the Spartans. 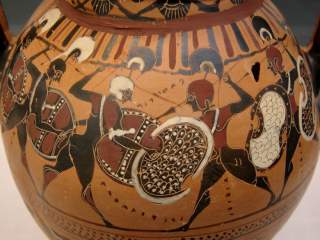