Roman art was inspired by Greek art and was focused on gods, politicians, philosophers or emperors which were presented in sculptures, paintings, reliefs and mosaics.

Sculptures were located in parks, public baths , forums, houses, temples and played an important role in Roman daily life. Sculptures took the form of full statues, busts (sculptures of just a person’s head), reliefs (sculptures that were part of a wall), and sarcophagi (sculptures on tombs).

Sculpture was done to glorify emperors as a way of propaganda presenting them with individual features as well as with idealized proportions. 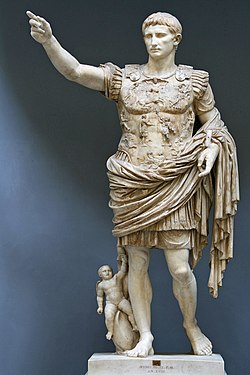 Rich families decorated their homes with sculptures of themselves performing their duties or their antecesors.

One of the most popular types of Roman sculpture was the bust which is sculpture of the head and these statues were placed in the atriums of Roman homes to show off their lineage. These sculptures were realistic and presented individualized features but they were different from the emperor as they showed age and imperfections.

The Romans also created equestrian statues. This type of statues presented a rider mounted on a horse and they take their name from the latin word eques which means knight and comes from equus meaning horse. A full sized equestrian statue was something difficult and expensive so they were made for military leaders and emperors. in ancient Rome but many of them have not survived because they were melted to be reused.

Another important type of scultpture was the historical reliefs. Relief is when a scene is carved in stone forming part of a building or other works. Reliefs were used to document important events and the stone materials used to carve them have contributed to their survival.

Historical reliefs were used to keep records of important battles or political events. It was a way of propaganda. This type of scultpture was carved in triunphal arches (Tito) or commorative columns (Trajan column) or even altars such as the Ara Pacis built by Augustus.