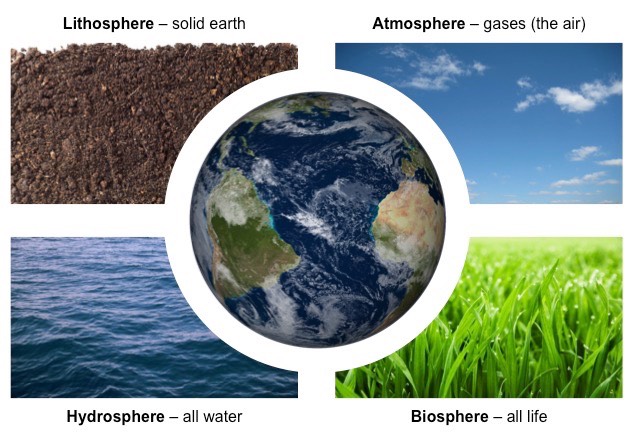 The names of the four spheres are derived from the Greek words for stone (litho), air (atmo), water (hydro), and life (bio).

The lithosphere is the solid, rocky crust covering entire planet. This crust is inorganic and is composed of minerals. It covers the entire surface of the earth from the top of Mount Everest to the bottom of the Mariana Trench.

The hydrosphere is composed of all of the water on or near the earth. This includes the oceans, rivers, lakes, and even the moisture in the air. Ninety-seven percent of the earth’s water is in the oceans. The remaining three percent is fresh water; three-quarters of the fresh water is solid and exists in ice sheets

The biosphere is composed of all living organisms. Plants, animals, and one-celled organisms are all part of the biosphere. Most of the planet’s life is found from three meters below the ground to thirty meters above it and in the top 200 meters of the oceans and seas.

The atmosphere is the body of air which surrounds our planet. Most of our atmosphere is located close to the earth’s surface where it is most dense. The air of our planet is 79% nitrogen and just under 21% oxygen; the small amount remaining is composed of carbon dioxide and other gasses.

All four spheres can be and often are present in a single location.

For example, a piece of soil will of course have mineral material from the lithosphere. Additionally, there will be elements of the hydrosphere present as moisture within the soil, the biosphere as insects and plants, and even the atmosphere as pockets of air between soil pieces.

lesson plan on four spheres of the earth

NOTES ON 4 SPHERES OF THE EARTH