Around 750 BC, Greek  traders came into contact with Phoenicians who used a script alphabet. The alphabet was a wonderful invention, because they only used around thirty letters to make different sounds, and it was also much easier to use than pictorial systems of writing such as cuneiform or Egyptian hieroglyphs. The Greeks adopted this alphabet and added vowels, which made it easier to use.

At first,  writing was used by the government for the laws. Writing was later used to record public decisions and records, and when  more and more citizens became literate, Greek literature developed.

The greatest literary works of  early Greeks were the Homeric Epics. These were epic poems which described the glorious feats by Grecian heroes. Epic poems are long poems and describe a serious topics. Homeric Epics described the great deeds of the warriors of Greece, who led the war against Troy,

Historians cannot prove that Homer really lived but the epic poems attributed  to Homer epic poems had inspired  much of Greek literature. The poems were: 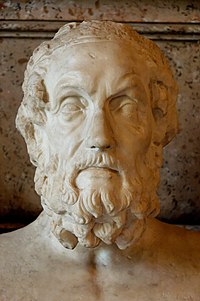 Sappho was the first woman poet from Greece. The majority of her work were short love poems. Only bits and pieces remain of most her poetry.

After the wars of the 5th century BC, a new type of writing was developed, the historical literature. Many historians began writing about the past in order to understand the causes of the war.

Herodotus has been known as the “Father of History. He invented the study of history, by asking the question: “why do events happen?” He studied the history of Persia and how it impacted in Greece.

Thuycidides was another great Greek historian. He did not finish his greatest work, a history of the Peloponnesian Wars. Thuycidides best known for his detailed analysis of events.

During the Hellenistic age, after the conquests of Alexander the Great, Greek culture spread to Europe, North Africa, and Persia. One of the places dominated by Greek culture was Egypt.

The Library of Alexandria

The kings of Egypt created a giant library, the Library of Alexandria, where they stored all of the great works of Greek poets, historians, philosophers, and scientists. It has been considered as a symbol of the growing scholarship of the Late Greek period

The Burning of the Library

We could never know what books were kept in the library of Alexandria, because in 48 BC, the library was burnt. More than 40,000 works of Greek philosophy, literature, history, and science were burnt and lost.