River Nile makes possible life in Egypt because it provides water for humans and to grow plants since the rest of the country is surrounded by deserts. Two regions could be distinguished: The Upper Egypt or river Nile valley and Lower Egypt or delta region. 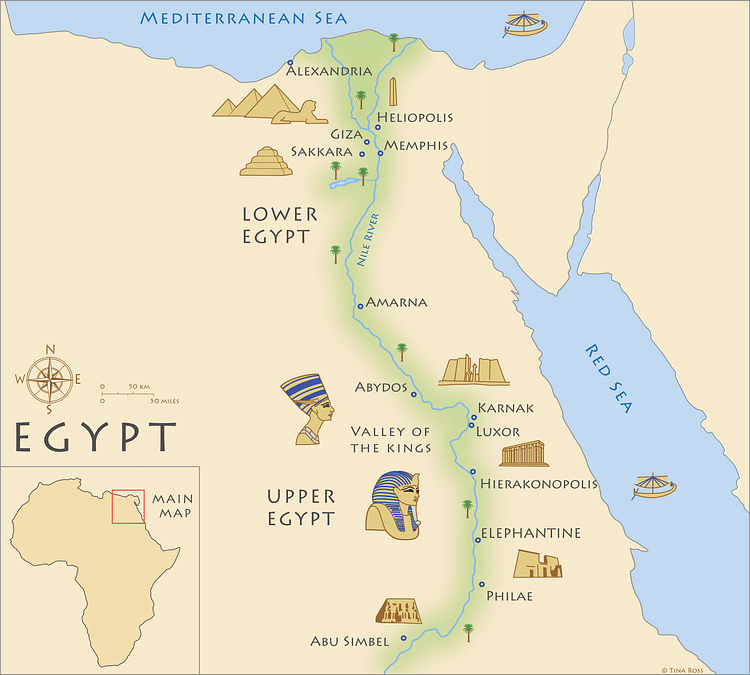 Every summer the river floods due to rain in the upland region. This covers the river banks with fertile slit which is the base for farming land.

Around 5000 BC, Neolithic peoples reached the area and controlled the floods by making drainages and canals. Therefore, agricultural production rose and population increased. Many independent cities ruled by nomarchs or local governors were founded until king Menes unified the river valley and the delta region. That’s how Egyptian civilization started.

The main periods in ancient Egypt history are: 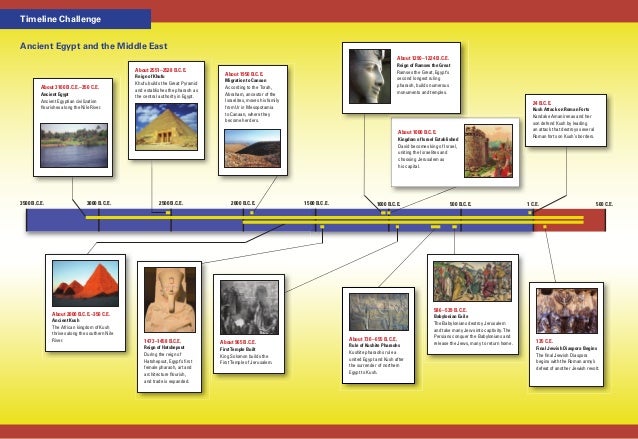 The pharaoh was the political leader of the Egyptians. They were considered as living gods and had absolute power to make laws, to act as a judge and to control taxes. Pharaohs also were military leaders controlling the army as well as religious leaders.

The upper group was formed by the pharaoh and his family, the nobles and the priests. All of them owned large areas of land.

This is a very diverse group. The intermediate group included the wealthy merchants, specialized craftsmen and scribes. The scribes were trained from the age of 5 and were almost the only people who could read and write. They were in charge of the official documents and keeping accounts.

The lower group consisted of free people (peasants, artisans, soldiers and servants) and slaves. Peasants farmed the lands belonging to the pharaoh, nobles and temples. They paid high taxes.

Slaves had a miserable condition and mainly were foreigners and war prisoners.

The base of the Egyptian economy can be found on irrigated agriculture. The sowing season was in winter as the floods took place in summer (from June to September) while the harvest season was in spring during the dry season. All the lands were irrigated using canals and dykes. 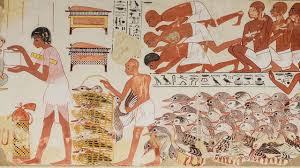 The main crops cultivated were wheat for bread, barley for beer, linen, papyrus, cotton, vines, olives, fruit trees, vegetables, etc. To farm they used simple tools such as the plough, the sickle the hoe and the shadoof to pump water.

Appart from farming, the Egyptians practiced livestock breeding. They used cows and donkeys for transport and farm as well as they bred sheep, poultry. Fish from the Nile completed the Egyptian diet.

There was a big surplus which benefited the division of labor. Stone masons, carpenters, potters, silversmiths, weavers were the most important artisans. Besides local and long distance trade played an important role in the Egyptian economy.